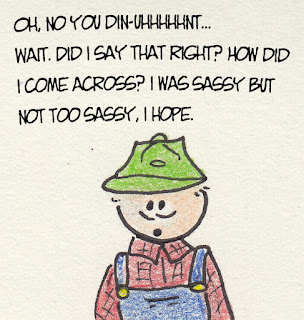 What makes this a failed, less-than-genuine comic strip in blog format is that I don't do a lot of lettering. I do some, but not a lot. The less I do, the better it is on your eyes. I really can't draw, and I can't letter, and most of my ideas suck, but I can wield a steady hand when deploying my trusty colored pencils.

Due to the backlash against Comic Sans, I have decided not to use it, even though I only used it for a few of the Photoshop panels I was creating here and there. That left me in need of some fonts.

Font Brothers has the answer, and they have a thing called "free fonts" and that's exactly what I felt like paying (at some point, I would like to get a few of their nicer packages of fonts).

The test panel shown above features the ZITZ font that I downloaded and unpacked and unsorted and dumped into a library folder. I don't think it looks half bad. The fonts they have over there are well above my level of typographical understanding. Truly amazing stuff, actually.
- September 11, 2010
Email ThisBlogThis!Share to TwitterShare to FacebookShare to Pinterest
Labels: Abbott and Gooseberry, Art, Comedy, Comic Strip, Comics, Daily Comic Strip, Drawing, Fun, Funny, Humor, Illustration, Life, Musings, Personal, Post