The Influence of Matt Groening 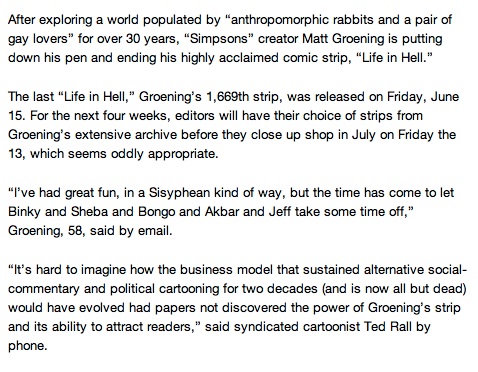 One of the reasons why I started trying to draw cartoons in the late 1980s was entirely because of the work of Matt Groening. Sad to say, he's calling it quits on his strip. Long before there was a Simpsons, there were alternative weekly papers that carried his work, and I read them religiously, along with others. I remember getting the trade paperback for Life in Hell, which was so oversized, it didn't fit anywhere else. It stood out.

Groening's work made things we take for granted now normal at a time when it was perfectly understandable to hate and shun people who had AIDS and people who were gay. If not for the exposure of these different ideas--and they weren't so much as out there as they were shocking to those of us from sheltered communities and Midwestern states--I don't know what would have happened for a lot of people who had a hell of a time back in those days.

His work had a tremendous influence on what I try to do. There are years and years of strips you'll never see because they just aren't that good. But they are the building blocks for what little I still find time to do. The fact that what I do seems to not suck as much as it used to is a testament to my ability to keep at it. That's why I admire Groening's work--he succeeded and built something that has inspired a lot of people to put pen to paper and try. Here, we try and don't quite get there, but we try, nonetheless. Of all of my blogs, of all of my sites, this one is actually the one that I will always hang on to, out of a sheer stubbornness that I can't quite explain. Call it a delusion. But it's mine.

This strip started in 1988, in the middle of South Minneapolis, epicenter of the alt-weekly culture and ground zero for the crack epidemic that destroyed whole neighborhoods as I was stumbling around like a confused, small-town idiot, trying to acquire music, culture and something of my own. I was pretty fortunate--I didn't have a hell of a time at all. I lived in some awful places, endured awful jobs, and dealt with horrible people. But I never stopped trying to do my own lame stuff the way I wanted to do my own lame stuff. I never stopped trying to get my stuff out there and, thanks to the Internet, I can have my own web page and my own accounts on different services and I can put my stuff out there and I couldn't be more pleased with the wonderful comments and acclaim that I've received.

The business model that built Groening's strip is gone--as in, out of business, destroyed, and shut down. The alt-weekly papers aren't viable anymore. The Internet is there, and places like The Oatmeal are certainly on the right side of the divide between innovation and outright theft. You can't expect to have a career anymore. But, you can do your thing and put it out there and accept the verdict of the marketplace. And if you don't care what that verdict is, all the better.
- June 21, 2012
Email ThisBlogThis!Share to TwitterShare to FacebookShare to Pinterest
Labels: Art, Blog, Blogging, Comedy, Commentary, Life, Musings, Personal